This post highlights Rich’s and my travel to Kuujjuaq, in the Canadian region of Nunavik, starting on August 6, 2015. The next post will focus on our bush flight to Lake Diana where we camped on the Tundra. Tundra land begins north of the tree line. Though I’ll show some Tundra photos in my next post, and later at my on-line gallery, most of the Tundra photos will be withheld, pending the release of a photo book next year.

Nunavik comprises the northern third of Quebec. According to Wikipedia, it covers 171,307 square miles north of the 55th parallel, it is the homeland of the

Inuit of Quebec. The 2011 census shows about 12,000 inhabitants, of whom 90% are Inuit. There are fourteen villages strung along the coast of Nunavik. There are no roads linking the villages.

Nunavik means “great land” in the local dialect of Inuktitut and the Inuit inhabitants of the region call themselves Nunavimmiut. Until 1912, the region was part of the District of Ungava of the Northwest Territories.

Negotiations for regional autonomy and resolution of outstanding land claims took place in the 2000s. The seat of government is Kuujjuaq, where we stayed before and after our four days on the Tundra. Negotiations on better empowering Inuit political rights in their land are still ongoing.

After driving 5 1/2 hours to the Montreal airport we stayed at the Novotel before catching our next day flight to Kuujjuaq (clicking on each photograph will display it full screen). Our airline, First Air, is 65 years old,

serving the far north; it also conducts world-wide charters. It is fully Inuit owned since 1990. As you can see in the photo, the forward section of our 737 is configured for cargo (the money maker), passengers are relegated aft of the bulkhead (all coach). The service, however, was excellent, including a full

meal. We left sunny Montréal at about 65º F and arrived at misty Kuujjuaq 2 1/2 hours later at about 40º F. The weather did clear later in the afternoon, with mostly good weather for the rest of the trip.

undra Tom, of Great Wildlife Adventures, picked us up at the airport

and took us to our inn. We arrived two days before the Tundra

bush flight so we could photograph in the village. Unfortunately, I didn’t feel comfortable photographing people since I wasn’t there long enough for them to get to know me. The only exception was a photograph I took of an Inuit woman sewing sections for a tent since we were

granted entrée, facilitated by one of the community’s leaders, Allen Gordon.

states, the sub-arctic is not amenable to southern living. Kuujjuaq sits on permafrost, with only the top 18 inches or so melting during the warmer months. Consequently, all lines and tanks cannot be buried (there are no underground

culvers or sewer lines). Each building contains its own heating oil, water, and septic tanks (residents call for service when these tanks approach empty or full). Housing is highly insulated and designed to withstand high winds. On December 21 sunrise is 8:18 and the sun sets at 14:44. It gets cold, with the lowest temperatures approaching -35º F. Buildings are raised about a foot above ground to allow for up-welling each spring.

The cost of living is high because everything has to be flown in, or delivered by barge (there are no roads connecting to

southern Quebec). Barges can only enter the Koksoak River at high tide and must depart with the next high tide since the river is not otherwise navigable, due to large rocks. Everything is shipped via Montréal. As a result, most people rent housing, built by the government, due to its high cost.

shortly after dawn. Before we reached the escarpment we noticed that frost covered the plants, as the temperature had dipped below freezing overnight. We were joined by a young husky who escorted us most of the way.  The view was impressive as a morning mist still hung over the river. 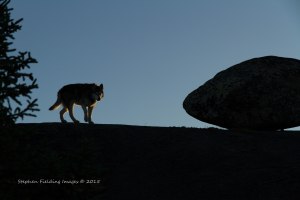 Diana on the Tundra, along with introducing the other members of our expedition.