This past winter I began thinking about what might be an interesting local photographic project. Then, while on a trip through the countryside, I rediscovered wind turbines that I saw along the hilltops. So, I began exploring some of these fields from the surrounding roads. I will admit that my bias is towards renewable energy. I have no financial ties to any energy company (except for my monthly utility and gasoline bills). Rather, my bias results from 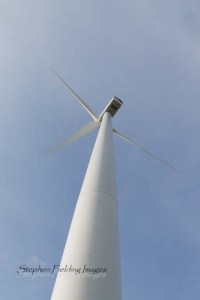 data. Fossil fuels are not only warming the planet, but they will run out at current consumption levels over the next 50 to 100 years. The geological, climatic, and biological data (presented earlier on this website) all point to the critical importance of finding alternate energy sources.

Beginning in March I began photographing the turbines under different weather and lighting conditions and eventually got access to photograph some of the turbines up close. Contrary to what you might have heard, they

only make only a soft whirring sound. To my ear, it is almost as pleasant as listening to the surf. There are times, however, when some become noisy, producing whistling or other noxious sounds. This is due to rough surfaces developing on the leading edges of the blades from wear and tear, or small blade holes caused by lightning strikes. However, power companies replace the blades once noise becomes a nuisance. The turbines in this field (almost 100 of them) are certainly tall, standing 280 feet to the hubs with each blade extending out to 120 feet. And they are even taller in the west, some going 500 feet to the hub!

flowering plants, they do present a majestic look over the landscape. Although many communities have rejected these (particularly when proposed for

offshore), they have a small footprint and have far more grace than traditional power plants. They take little time to erect and when finished the land is not compromised so crops or cattle can be farmed. Some folks almost have them in their back yards.

Wind turbines are not the total solution to our energy needs. There are several forms of renewable energy besides wind: solar, hydroelectric, biomass, hydrogen and fuel cells, geothermal, and tidal. Collectively, these sources will diversity our energy grid as the cost of these technologies decrease. This would have the added advantage of minimizing the risk of power plant shutdowns due to damage or maintenance.

I will present more photos and comments about wind turbines in future posts.

Do let me know your thoughts, positive or negative, on renewable energies.

You can learn more about wind turbines, including engineering information and references, from Wikipedia.

3 thoughts on “Wind Turbines: One Leg of Renewable Energy”

I'm a retired medical sociologist from the University of Rochester. Climate change is one of the two great challenges facing humanity (the other is nuclear weapons). In writing about the impact of climate change I read reputable books and articles on the topic. So when I make statements about climate change you will see a link taking you to the scientific source(s) of the information I provide. As for my independently published photobooks, each has gone through several layers of editing and peer review for both readability and accuracy. This is not to say that everything I say is accurate. Even the New York Times makes mistakes. So, if you find something that is factually incorrect, let me know. I hope you find reading my blog a positive experience. If you do, please encourage your family and friends to have a look. You can find photos from my other photo work by clicking on the My SmugMug Gallery tab, above. Best wishes, -Steve View all posts by Stephen Fielding Images