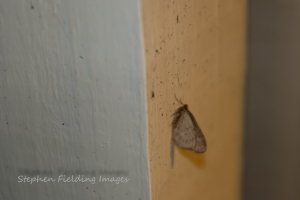 thousands of winter moths in my headlights. When I returned home there were dozens on the outside wall by my lighted front door. I told my friends about this who said that southern Maine is loaded with these pests that became established in the area around 2012.

A little research on my part found that they are native to Europe and the Near East; they were inadvertently introduced into Canada in the 1930s. They have no predators in North America and are now established in New England and the Pacific Northwest.

They are highly destructive of deciduous trees, as they eat the leaves during the caterpillar stage of their life cycle. The tree will die if it is infested with this caterpillar for several years in a row.

Remedies to limit these moths have included spraying plants in the spring before the ambient temperature reaches 55 degrees Fahrenheit, and tying

sticky strips around tree trunks so the wingless female cannot climb up to lay her eggs in the tree’s crown. However, a more effective strategy is to release its natural predator, a wasp (Agrypon flaveolatum) and a fly (Cyzenis albicans). The latter has worked particularly well recently in Massachusetts, but not so well in the Portland, Maine area where there have been at least two major fly releases, as reported in the Bangor News and by the Maine Department of Agriculture, Conservation & Forestry.

The infestation of winter moths does not seem to be related to climate change, but rather global shipping and travel. You can read more about this pest in a Maine Department of Agriculture, Conservation & Forestry document.