Originally posted 10/1/2014: Occasionally I revisit past posts that I find particularly interesting.

What would a photo trip to Maine’s coast be without including a focus on its rocks? You’ve seen these in numerous photos where they look great from a distance, but I decided to literally focus on them up close. This is also an exercise in capturing form and texture, which is quite useful for developing a “photographic eye.”

Like our own bodies, our planet undergoes constant change. What appears as a permanent Earth is only temporary. According to a placard installed in Two Lights State Park by Maine’s Bureau of Parks and Lands, there is an interesting  story associated with these rocks. They are about 440 million years old. They formed:

. . . when sand and mud eroded off the continent and into the bottom of an ancient sea. Over time, the sediments hardened into layers of the sedimentary rocks called sandstone and shale.

As if in a giant vise, that ocean basin was being gradually squeezed between the ancient edge of North America and a micro-continent geologists call Avalon. As Avalon advanced toward North America, those sedentary rocks were folded, faulted, and subjected to a prolonged period of pressure and heat. This process changed the sandstone and shale into light brown quartz and dark gray phyllite, the metamorphic rocks that we see today.

About 400 million years ago, Avalon finally collided with North America. This collision destroyed the ancient ocean, lifted these rocks, and formed the northern Appalachian Mountains, which were several miles high [author’s note: much like portions of the Rockies today]. This was a geologically active time of massive earthquakes and erupting volcanoes. Within the next 150 million years all the Earth’s continents merged into one giant landmass called Pangea (“All Earth”).

Then about 200 million years ago, Pangea began to break apart. Great fissures spewed forth molten rock, and earthquakes shook the landmass as it broke up along fault lines into the continents of North America , Eurasia, and Africa.

Of course, change is not over, yet. The earth will continue to undergo dramatic change for the next 5 billion years, until our sun becomes a red giant.

You can see how the rocks have folded back on to themselves in the following photo as a result of being pushed up to the shore.

Nooks and crannies in the rocks provide homes to snails and resting places for gulls.

The rocks also work for humans.

As I said previously, the rocks continue to be reshaped by erosion caused by the sea, sun, and air. The three full-size photos, below, offer a close-up view of these effects, that just fascinate my eye. I suspect the cracks which appear so geometrical are the results of alternating heating and cooling that caused breaks at the rocks’ fissures. 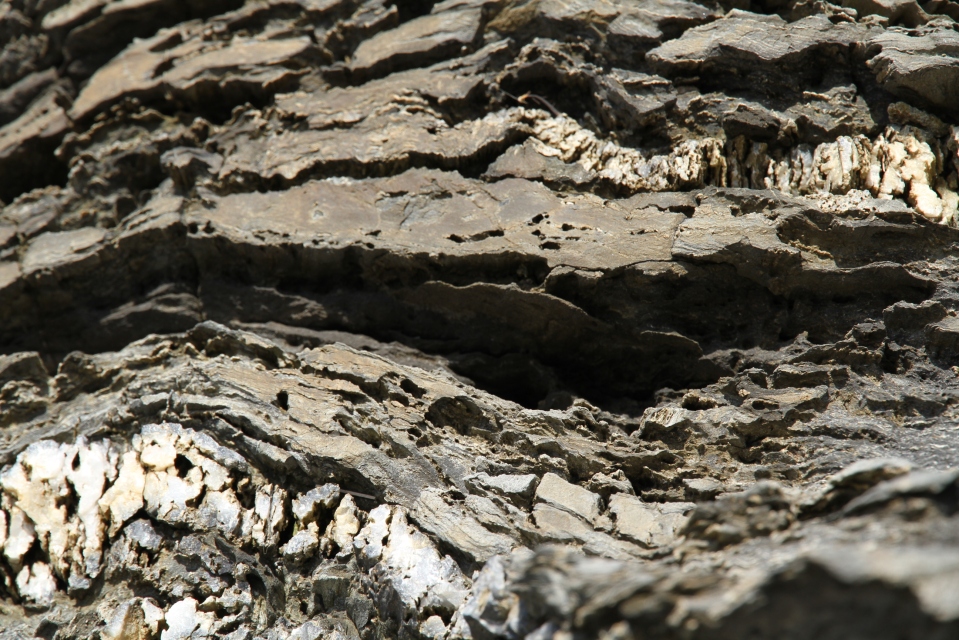 Here, it almost looks as though someone cut the rock with a saw. 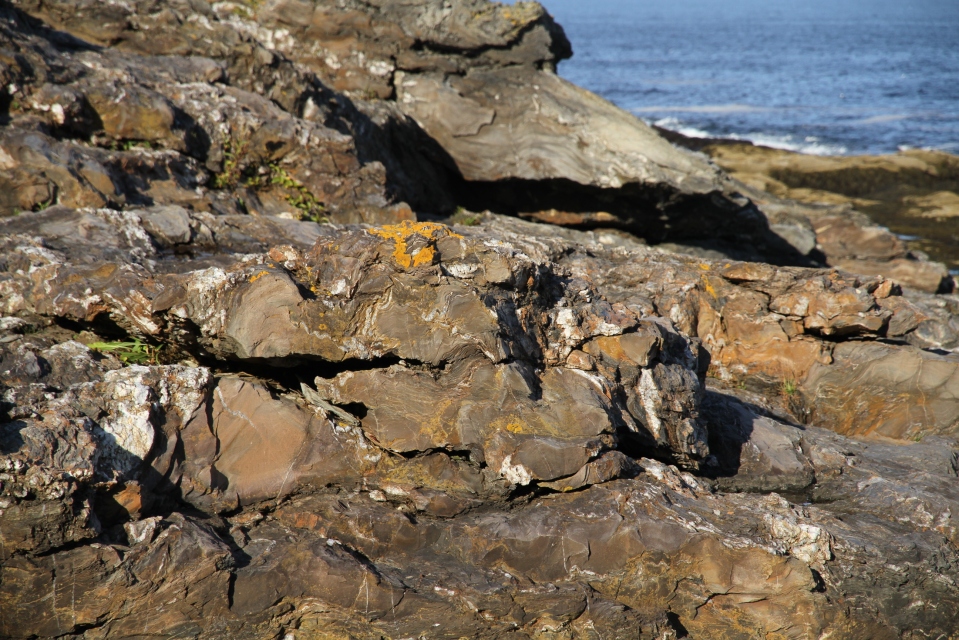 Stepping back for the “big picture” is even more interesting as the crags in the rock invite the viewer to scan down the scene.

Just as mollusks find the rocks a good place to live, so do some of the moss and lichens, below.

As I travel around looking for some good foliage scenes during the next two weeks it’s becoming evident that these will not be as dramatic as the classic Vermont and New Hampshire scenes. Maine, particularly along the coast, has far more conifers and Oak tress (the latter going mostly from green to brown) so the concentration of color will be more dispersed. Even so, Maine’s colors are beginning to pop, the Maples up first manifesting their bright reds.

Lots to do yet!

One thought on “Maine’s Rocky Coast”