Although my blog’s focus is the natural environment, here I make an exception to focus on the social environment. My friends have invited me to several events here on the coast. The first was the Common Ground Fair, held annually up the coast in Unity Maine. It features the produce of Maine’s organic farmers and other locally produced goods. There is a lot of publicity in Maine encouraging people to buy local. We were in stop-and-go for miles getting to the grounds. Once we got through the gate the fair had the feeling of the sixties, except instead of fields populated by concert goers, there were now food and goods producers. There are about 900 local farms in Maine, and about a third of them are organic certified.

There was a lot of livestock. One of the crowd pleasers were the alpacas. They are really cute. Their fur is one of the warmest and used to line winter coats–something to begin thinking about.

There were simply too many exhibits to completely see. However, one that many folks did not want to miss

was the border collies exhibition. These working dogs are bred to work in teams and trained to understand many verbal and hand commands. They follow instructions to herd sheep and goats, as desired by the farmer. A couple of fair goers in the photo to the left are checking to confirm when and where this demonstration will take place.

And who could forget the brass band from Providence, RI that came to play at the Fifth Marine Museum on Peaks Island? It was a beautiful day, ensuring a good island turnout. What the band might have lacked in its budget was more than made up for by their diversity and enthusiasm, as you can see in the following shots.

Although they had no uniforms, they did have two tubas! Beyond that, each player looked like they were from very different backgrounds.

They got people dancing and one of the short people topped a rock for a better view of the activities. 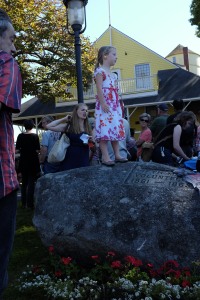 Then, this past week-end it was the Maine Marathon, attracting about 3500 runners. There was also a 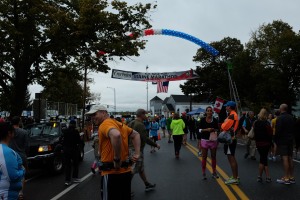 half-marathon, and a relay. All began at the same time and shared the first 6.5 miles of the course before splitting off.

Here they are, just after the gun went off. Having been a runner for nearly 40 years I was a bit envious of this crowd (now I mostly swim for my aerobics). Among one of the notables in the half-marathon was my long-time friend, Black Dog Davey,

seen in the pre-race photo to the right. Unfortunately, he was “nosed out” by Moninda Marube with a winning time of 1:08:13, seen

approaching the finish line in the next photo. By the way, the full marathon winner was Rob Gomez, burning across the finish line in 2:34:42 (that’s an average of 5:13 per mile–wow–but nowhere near the world record of 2:02:XX just set in Berlin–these guys must be cyborgs).

Over the next couple of weeks I’ll be focusing on the foliage scenes, particularly in the Rockland area.

Peaks Island is located off the coast of Portland, Maine in Casco Bay.  Once arriving into Portland, it’s off to catch the ferry for the fifteen minute ride. We’ve been going to Peaks for about 25 years to visit our friends, Debbie and Dave, among others. Our last trip was this past Memorial Day week-end. Dave and I went into Portland to shoot some photos (shown below). On our way back along the unimproved dirt road leading back to their cottage I noticed a bird in a tree overlooking a small pond–a Black-crowned Night Heron. These birds typically feed at night. There I was with only my 15-85mm lens, not the ideal equipment for bird photography.  The camera was set for aperture priority but I figured I should take the hand-held shot before the bird decided to fly, then reset the camera to shutter priority to assure a sharp shot.  Sure enough, the bird bolted. Nevertheless, the photo came out great–at 1/20 sec!

Portland is a deep-water harbor, enabling large vessels to come in.  As a result, a lot of crude comes in from the Middle-east–Portland can unload 4 supertankers at one time.

Front Street runs along all the piers in Portland.  Although there has been substantial gentrification, including several investment houses for the New Yorkers and Bostonians who summer on the islands, there are several “seedy” areas still to be had.  Many of them provide the best atmosphere and food, such as breakfast and lunch at the Porthole.

The last photo shows one of the examples of gentrification, new condominiums located across from old the warehouses of the past.